What if ‘nothing ever goes back to normal’? Depression, anxiety mount in Bay Area


Though she has battled depression since high school, the past few years have been happy ones for 28-year old Kendall Anne Warnock.

But when the pandemic hit, Warnock lost her job at a downtown San Francisco restaurant, then her apartment. Her unemployment check never arrived. And her depression returned with a vengeance.

“I feel like I’m a failure. All these people are fine, and I’m not,” Warnock said. “What’s wrong with me?”

Warnock is not alone. Countless others in the Bay Area are battling anxiety, depression and even thoughts of suicide brought on by the region’s pandemic-induced economic collapse.

In San Francisco, calls for high-risk suicide situations rose 25% on average from May through July 2020 compared to February through April, according to data from the Felton Institute-SF Suicide Prevention, a nonprofit that handles crisis calls for the city. Behavioral health calls doubled in that same period, with more than 5,500 callers expressing mental health concerns from May through July, according to the same report.

In Alameda County, calls related to suicide that are considered medium or high-risk situations rose 272% this year through June compared with a year earlier, according to data from the Crisis Support Services of Alameda County.

At least 55 people in Alameda County and 27 in Santa Clara county have died by suicide since the beginning of the pandemic, according to data from county coroners and medical examiners. The numbers are lower than last year’s tallies but could change as new reports come in and medical examiners continue to close cases.

The total number of deaths by suicide in the nine-county Bay Area since the beginning of the pandemic is unclear due to a lag in state records.

David Spiegel, director of the Center on Stress and Health at Stanford University, estimates that the suicide rate has risen in the Bay Area but said data may be delayed as officials focus on the wave of coronavirus-related deaths. 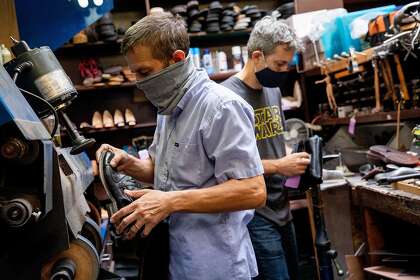 Since shelter-in-place began in March, Alameda County has seen a rise in behavioral-health related calls, such as those relating to anxiety, depression and suicidal thoughts, and calls have surged over the past month, said Dr. Karyn Tribble, director of the county’s Behavioral Health Services Agency.

Referrals to the Alameda County Behavioral Health Mobile Crisis unit from March through June of this year have risen to 205 this year, up from from 137 for the same time period last year. The department has also seen a marked increase in queries from people with mild to moderate depression and anxiety, Tribble said.

In Santa Clara County, the number of calls to a crisis hotline has remained relatively steady in comparison with last year, but most callers are expressing high anxiety about job losses, financial distress, coronavirus spread and a desire to return to “normal,” according to data provided by Joy Alexiou, a spokesperson for the county’s health department.

Across California, the percentage of people with reported symptoms of anxiety disorder has increased by about 9 percentage points from late April to mid-July to almost 39% of respondents in the CDC’s Household Pulse Survey on mental health, which is conducted weekly. The proportion of people with reported symptoms of depression has jumped by about six percentage points to 31% of respondents in California, according to the data.

Nationwide, an estimated 10% of Americans — considerably higher than usual — seriously considered suicide in June, according to a June 24-30 survey by the Centers for Disease Control and Prevention. The percentage was higher among Hispanic respondents, at almost 19%, and Black respondents at 15%. Anxiety, depression and substance abuse as a way to cope with stress have also increased, the CDC report says.

“I’m not sure we’ve ever seen anything quite like this,” David Mineta, CEO of Momentum for Health, the largest nonprofit provider of mental health services for Santa Clara County, said at a live-streamed event. He added that “folks who don’t have a behavioral health disorder or condition, many of us are starting to feel like we are experiencing this now.”

Financial problems create a lot of stress and can make existing behavioral health disorders worse, or even cause new ones for previously healthy people, according to Spiegel.

Between 15% and 18% of the American population has an anxiety disorder and between 10% and 14% of Americans have minor or major depression — and those numbers will likely increase during the current crisis, he said.

Historically, recessions have caused corresponding mental health crises, he said. And unlike the 2007-2009 recession and the Great Depression, the pandemic and social-distancing requirements have created “a perfect storm,” Spiegel said, adding that suicide rates tend to increase when people feel they cannot rely on family and friends.

The financial uncertainty surrounding his business weighs heavily on Steve Oberhauser, owner of shoe-repair shop the Cobblery in Palo Alto. “I get depressed when I just sit there and think about it,” he said.

His family is the fourth generation of cobblers at the shop, and while they have grappled with some level of financial challenges since it first opened in 1940, this feels different.

“It’s this big unknown. We don’t know what this next month is going to bring,” he said.

Because they have been hardest hit financially and also by COVID-19, Black and Latino communities are facing the most dire version of the coming mental health crisis, said G. Cristina Mora, a sociology professor at UC Berkeley.

Latino communities are also less likely to have access to mental health resources as depression and anxiety increase, due to factors including poor health insurance that makes treatment expensive and therapists inaccessible, Mora said.

Even people who have not lost their jobs are feeling the financial stress, Tribble said. The cost of living has increased for parents with children because of remote schooling; for the first time, many have to pay more for food, child care, education technology like laptops and electricity.

If you need help

National Suicide Prevention Lifeline: Call 800-273-8255 to reach a counselor at a locally operated crisis center 24 hours a day for free.

Crisis Text Line: Text “Connect” to 741741 to reach a crisis counselor any time for free.

Estimated percentage of Californians who report having symptoms of anxiety disorders

Estimated proportion of Americans who seriously considered suicide in June

“Basic things are financially complicated” for everyone, which is very unusual, she said.

In addition to seeking professional help, the best thing that people can do for each other is to both seek and offer support whenever possible, Spiegel said. And though he knows it seems cliche, Spiegel said that people will often feel better when they “eat well, sleep well and get plenty of exercise.”

Warnock is now relying on her partner, friends and family for housing, financial help and emotional support. She has not seriously considered therapy because she worries that her insurance would not cover the cost.

“I’ve been trying to find where I fit in this world, even if nothing ever goes back to normal,” she said.

Investigation Into Novel Physics in Troilite Could Enable Spintronic Computing