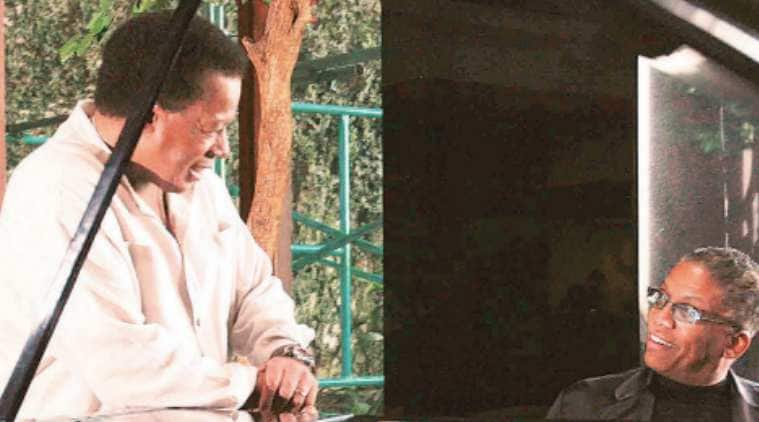 The Right Notes: Wayne Shorter and Herbie Hancock in Mumbai.

Wow, man, what an eclectic compilation! Conversations, interviews and reportage with some of the greatest masters of music, from Roger Waters, Ian Anderson, Mark Knopfler, John McLaughlin, Sting, Jean-Luc Ponty and Carlos Santana to L Subramaniam, Louis Banks, Sivamani, Ranjit Barot, Junoon and Amyt Datta, and Srikanto Acharya, the contemporary folk group Bhoomi and Tapas ‘Bapi’ Das of the baul jazz and blues group Moheener Ghoraguli. I like this genre in the regional languages, and Shantanu Datta does well to include them in the book. I wish he had also included the pioneers, Kabir Suman and Anjan Dutt. Datta has the credibility to write Calling Elvis. The book describes him “as a journalist (who) has been placed at the forefront of music reportage for much of the past three decades”. He lives up to the reputation.

I find that interviews of artistes, especially musicians, and, particularly, rock and pop artistes are very fluid, random and too casual. Perhaps, it is because they are not ‘in the moment’, which is when they are composing or performing. But Datta manages to hold them captive by his questions. I liked the interviews with John McLaughlin, Jean-Luc Ponty and Herbie Hancock, exploring their relationship with Miles Davis, “the Picasso of jazz”. Datta’s interactions with humble men like Sting and Carlos Santana are heartfelt.

These are mature musical conversations and one learns so much about the etiquette and aesthetics of the art. Aspiring artistes would do well to imbibe the wisdom of these musicians. I must confess that I don’t understand the idea of fusion music, and don’t like the term because it undermines music itself, but if artistes from varied genres getting together and performing is what explains fusion, then I am all for it. ‘Jamming’ is not the word.

I also did not understand why the book had to be pegged so heavily on the interviews and conversations, as Datta calls them. They’re great add-ons to the story, but the reportage is much more than that. It’s about the music of the times when it was practised, and the temperament of artistes. As Miles Davis said, “I am not what I do; I do what I am.” Datta’s writing on Western music and the scene in Calcutta is very profound. His next book, perhaps the sequel to Calling Elvis, should be about Western music in India and the strong influences that it is structured on. The music scene in Delhi, Bombay, Bangalore and Madras could have completed the story.

I loved Datta’s tribute to Dilip Balakrishnan of Great Bear — and later, frontman, vocalist and songwriter of the group High — and to Usha Uthup’s tenacity in doing what she has done. I was also hanging out in Calcutta at that time and it all rings so true. I met Devdan Sen of Great Bear in Amsterdam many years ago and we reminisced about the times, and similarly with Louis Banks and Pam Crain, who sang for one of my albums. Thankfully, I am in touch with Nondon Bagchi and Usha Uthup to get my fix of the late Sixties and early Seventies in Calcutta. I remember Pandit Jnan Prakash Ghosh playing me some nonsense verse on the tabla when I was a boy. It sounded like hip-hop.

Datta’s inclusion of the music store Braganza is wonderful. Old man Braganza presented me with a 12-string guitar in the Seventies, which I still have and cherish. George Harrison, Ian Anderson, Ian Carr of Magna Carta and several other musicians from the West visited Braganza to buy Indian instruments. There was also Hemen-da or Hemen Babu, who made a scale-change harmonium for my father. I am glad that there is also a mention of Melody, the record store which was a meeting point for young musicians in Calcutta.

The book is a must-read for music lovers and practitioners. Datta’s Calling Elvis is a job well done. In his own words, “As tributes go, this one, by one who grew up in Calcutta, and drew on experiences our magnanimous country throws up every day, may seem woefully inadequate, given my own shortcomings and the varied nature of the conversations. But it is a tribute nevertheless… if for nothing else, then for the singers of the world, their tunes and symphonies yet to come.”

Isn’t It Romantic? – The G-File

This Is An Angst-Free Zone

Why Young Adult Books Still Appeal to Me as an Adult