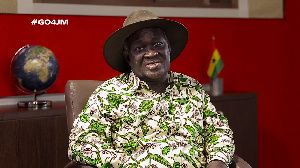 Special Prosecutor and stalwart of the National Democratic Congress (NDC) Martin Amidu has released yet another literary review of Professor Kwamena Ahwoi’s book, Working with Rawlings, accusing of him exhibiting scholarly dishonesty and disregarding accepted principles in writing a book of the calibre he has authored.

Martin Amidu, who had earlier written very elaborate pieces on the controversial book noted in the latest book Prof Ahwoi is boastful character who presented himself as an indisputable indispensable person to the success of the military regime, the Provisional National Defence Council, which was headed by Jerry John Rawlings.

“The author states at pages 13 to 15 of “Working with Rawlings” that between 31st December 1981 and August 1982 the author operated at the PNDC Secretariat with no specific schedule or appointment letter. Instead of describing himself modestly as an errand boy he says that he “performed as a kind of Special Assistant” performing “some routine assignments like handling some of his mail, minuting on some of them and sometimes drafting replies to be signed and issued originally by Mr. B. B. D. Asamoah the first Secretary to the PNDC (see pages 13 to 14 thereof). It was in this position that he was chosen as part of a 5-member delegation led by Brigadier- General Joseph Nunoo-Mensah, member of the PNDC to Nigeria to negotiate for the restoration of oil supplies to Ghana by President Shehu Shagari of Nigeria,” he pointed out,” he expounded.

Mr Amidu also raised ethical issues about the disclosures in the book, saying that he breached confidentiality rules and should have made the disclosures with the express approval of the persons involved.

GhanaWeb is not responsible for the reportage or opinions of contributors published on the website. Read our disclaimer.

9 romantic thrillers that will keep you on the edge of your seat, on Netflix, Amazon Prime Video and Disney+ Hotstar

9 romantic thrillers that will keep you on the edge of your seat, on Netflix, Amazon Prime Video and Disney+ Hotstar

‘Matchmaker Mysteries: A Fatal Romance’: Release date, plot, cast, trailer and all you need to know about Hallmark’s mystery movie