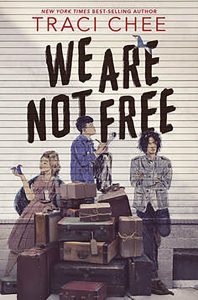 In the young adult novel We Are Not Free, Yonsei writer Traci Chee follows 14 Nisei teenagers, mostly from San Francisco Japantown, through their wartime incarceration. It’s a daring project; the characters hand off the epic story as if it were a relay baton, each picking up the plot where the last one left off. The result is an emotionally nuanced though historically puzzling book which will appeal to contemporary young adult readers.

A New York Times-bestselling author of books for young adults, Chee’s strengths are particularly highlighted in the novel’s emotional resonance. As a somewhat emotionally reticent generation, not many narratives about the incarceration dive so deeply into the emotions of Nisei teens: fear and resistance to racist bullying, adolescent love and heartbreak, rebellion against parents and authorities, anguish at family separation.  Much of the time, these portraits will feel relevant and relatable for contemporary adolescent readers.

Chee’s sensitivity to multiple viewpoints and positions is also one of the novel’s highlights. Most admirably, the narrative resists placing military service in direct opposition to the narratives of resistance (No-No’s, hunger strikers, renunciants, repatriates). The novel also covers more than one camp (Topaz, Tule Lake). In particular, its detailed attention to Tule Lake covers material that’s rarely been seen in young adult books: the stockade, the bullpen, as well as the use of organized resistance such as hunger strikes. The characters who volunteer for the 442nd military regiment are also given sympathetic and detailed treatment.

Ambitiously, Chee’s novel follows 14 points of view, some in more depth than others. The strength of this approach is that it allows for a greater number of narratives (“only a fraction of the 120,000,” as the author acknowledges in the Afterword). Stories of issues like the loyalty questionnaire and registration crisis are more complex.  However, a risk with this approach is that it’s difficult to track which voice is speaking, even with the help of the “Registry” provided at the beginning of the book and the individual character names and ages at the beginning of each chapter. The difference between the voices doesn’t read as distinctly as it might, and the relationships between the characters (some are siblings, some are not) is also difficult to remember.

In several cases, the historical choices that the novel makes are harder to understand. The real names and circumstances of historical figures such as Dillon Meyer and Mike Masaoka are used, but the names of Japanese Americans who were incarcerated are not. Several historical figures have their names changed: James Wakasa, the Issei man who was infamously shot by a guard at Topaz;  Koji Todoroki, Tom Kobayashi, and Tokio Yamane, the Nisei men who were beaten with a baseball bat in the Tule Lake stockade are not named, but the infamous baseball bat is used in a situation involving several of the book’s main fictional characters. In a novel that pays so much attention to historical circumstances, it’s hard to know why the names of these men and their histories would be altered, rather than brought to light and remembered.

Other, smaller historical choices are similarly difficult to understand. At times, the novel veers into a contemporary writing style which rings less true for readers familiar with Nisei voices. (“THINGS I’M HOLDING ONTO: My anger,” writes one character in a chapter with similar lists.) Also, one of the characters is nicknamed “Yum-Yum,” perhaps a play on her Japanese last name, “Oishi” (oishii is Japanese for delicious). It’s hard to separate this cringeworthy name from Gilbert and Sullivan’s operetta The Mikado, and harder to understand the reasons for its selection among the many other Americanized Nisei nicknames available.

Finally, the frequent use of the word “keto” (Japanese racial slur for White people) may strike a jarring note, as it’s more widely used in immediate moments of anger than in passing references (“hakujin” seems to be more widely used). In an advance copy of the book, Chee notes that she uses racial slurs to highlight the racial animosity of the times, but does not specify which words are slurs, which can add to greater confusion.

Overall, I’m conflicted—the author’s ability to capture emotional resonance is skillful and will help bring Nisei teens to contemporary teens—but several of the historical choices prevent me from wholeheartedly endorsing the book.

Book Review | Marisha Rasi-Koskinen’s Rec novel is the most impressive of the year, and it reaches levels that people rarely reach in words – Pledge Times

Hong Kong Literary Festival Will Be Held Online This November 2020